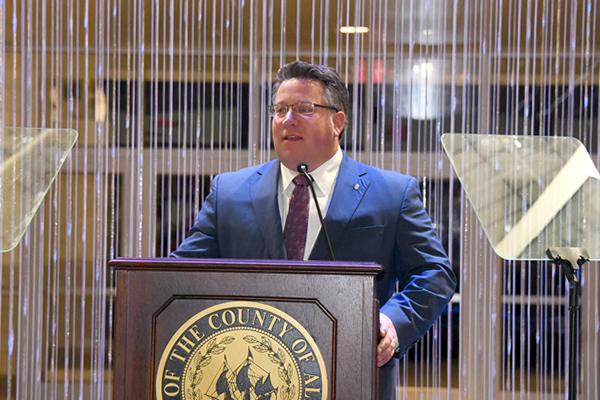 Daniel P. McCoy is currently serving his third term as the fourth Albany County Executive. Dan was born, raised and resides in the capital city of Albany where he has worked as a public servant his entire professional career. He was a firefighter and EMT for the Albany County Airport and the City of Albany and is currently a member of the New York National Guard where he has earned the rank of Master Sergeant. Dan was deployed to Iraq in 2005-2006 and aided in the disaster relief following Superstorm Sandy, Hurricane Irene and Tropical Storm Lee.

Before being elected as County Executive in 2011, Dan served twelve years as a County Legislator representing the 10th District containing parts of Albany and Bethlehem. He was unanimously elected by his peers to be the Chairman of the Legislature and served in this capacity for two years. He also served for three years as Chairman of the Albany County Democratic Committee, the youngest person to be voted to that position.

As County Executive, Dan has focused on finding creative and innovative ways to improve the delivery of services while streamlining government, keeping taxes flat and nearly doubling the county fund balance. He has prioritized fostering economic development opportunities and pursued a shared services plan by collaborating with Albany County’s nineteen cities, towns and villages that will save taxpayer dollars. He has delivered Indigent Legal Services funding from the State that will ensure everyone has their day in court; invested in the Albany County Land Bank; improved our parks and open spaces; is renovating the County Nursing Home; supports our veterans and is fostering economic development opportunities from Albany to the Hilltowns.

Dan is one of the leading voices across the nation and his priorities have included making Albany County the greenest county in New York State. He has championed for safe transport of crude oil by rail. He stopped the expansion of a crude oil treatment facility at the Port of Albany because of environmental concerns and the potential impact on adjoining communities. He has led the fight against the scourge of Opioid addiction by forming the Albany County Opioid Task Force, offering free Narcan training the first Tuesday of each month at the Albany County Department of Health and filing lawsuits against both manufacturers and distributors to hold them accountable for the epidemic.

Dan lives in Albany with his wife and has three children.