This is a rapidly changing situation. The Albany County Department of Health has COVID-19 information and resources available. »

Proper disposal of unused prescription and over-the-counter medications is important to protect both people and the environment. 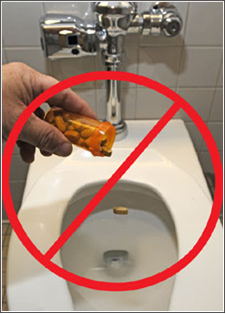 Unused prescription and over-the-counter medications that remain in the home can cause serious harm to people if they are taken accidentally, intentionally misused or inappropriately given to someone else.

Unused medications that are flushed down the toilet or poured down the sink can enter the water supply. Low levels of various drugs have been found in lakes, rivers and streams. Fish and other wildlife that live in the water are being harmed. There is also concern that drug-resistant bacteria may develop because of long-term exposure to low levels of antibiotics.

How to Dispose of Drugs Safely

Free viewers are required for some of the attached documents.
They can be downloaded by clicking on the icons below.