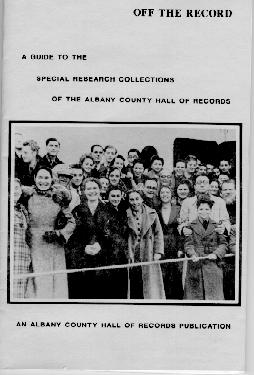 This guide includes an alphabetical listing of 1500 subject files pertaining to the history of Albany County compiled by the Bureau of Historical Services as well as a guide to the oral histories held at the Hall of Records.

The Hall of Records owes a debt of gratitude to its predecessor agencies under the City of Albany's Department of Human Resources who preserved archival records and began the process of making these available to the public. Thanks are due to John L McEneny and Mel Wolgang, past Commissioners of that department.

The projects were carried out under the direction of Bob Arnold and Neil Hanson. We'd like to thank Norman Rice, former City Historian, as well as the State University at Albany students who compiled the file research and oral histories. Credit is due to the individuals interviewed for sharing their life experiences with the future. Joe Anastasia, teacher at the Academy of the Holy Names,, gave us the videotape histories of the New Scotland Avenue area of Albany, the result of a grant from the Greater Capital Region Teacher Center in 1986.

The publicizing of this work at this time is due to the efforts of the Hall of Records' staff --Mary Vines, Patricia Bryce, Tracy Grimm, Virginia Farinacci, and the entire Archives staff. Thanks to Steve Lynch who processed the photographs contained in this publication, and to Charmain Marks, a volunteer from the Glenmont Job Corps, who was responsible for the word processing. Greatest credit of all is due to Jeanenne L. Paquin of the archives staff, whose time and energy made this publication a reality.

The eclectic collection of records, which has come to be known as the County Historian's Research Files, has its origins with the Emergency Employment Act program of 1971.

In August of that year, the federal government began funding Albany City and County governments to administer the first federally subsidized public service jobs program since the Great Depression. Three years later, the program continued under the Comprehensive Employment and Training Act (CETA) program, administered by the newly-created City Department of Human Resources. While CETA was not discontinued by the federal government until September, 1983, its Public Service Jobs component was phased out by late 1981.

At its height, in the summer of 1977, the Department of Human Resources had city and county jurisdiction and a payroll of over 3200 governmental and non-profit agencies throughout the county. As was the case with the WPA of the 1930's, many workers were assigned to arts and history programs which would not have been possible without the "windfall" of federal dollars.

The bulk of these f iles, now in the possession of the Albany County Hall of Records, were at one time the working files of the now-defunct Bureau of Cultural Affairs of the Department of Human Resources. BOCA, as it was known, carried out most of the direct city and county local history projects. In its later years, the bureau changed its name to the Bureau for Historical Services (BFHS) in order to Avoid confusion with the City Arts office, which was also run by the Department of Human Resources to carry out fine arts, festival and theatre programs.

In these files, the researcher will find not only documents pertaining to projects undertaken by the Department of Human Resources and its BOCA/BFHS (e.g.,the founding of the City Records Library, saving of the Quackenbush House, the Van Zandt archaeological excavation, and innumerable historic structure reports), but also delightful biographical sketches, ethnic and neighborhood studies and a potpourri of pamphlets, clippings, photographs, unpublished papers, interns' reports and miscellaneous correspondence from the Mayor, DER Commissioner, and many academic, governmental, and private sources. Such records are to be used with care, since, as working files, they vary in accuracy.

Through a fortunate set of circumstances, this collection of records has survived intact and indeed continues to grow. The demise of CETA coincided with the founding of the Hall of Records and establishment of the modern system of public record keeping. This was begun with assistance from the State Archives and Records Administration in 1980 by then County Clerk Guy Paquin, with encouragement and support of then County Executive James Coyne and the late Mayor Erastus Corning 2nd.

Ironically, the evolution of programs and changing of individual careers of administrators responsible for the creation of this research collection served only to provide for its continuity.

Robert W. Arnold III, who served as the Director of the BOCA/BFHS for its entire lifespan, became the first Director of the Hall of Records in 1981 and, three years later, assumed the County Historian's position as well.

As Commissioner of Human Resources, John J. McEneny served as Director of Public Employment Programs and CETA from the inception to the end of the programs in late 1983. He returned to local government as Assistant County Executive and County Historian, thus being reunited with a local history research collection begun during his stewardship eighteen years before.

Robert Arnold, who resigned both of his county positions in 1988 to become Chief of the Local Government Records Bureau of the NYS Archives, continues to use the records as a Director and faculty member of the Hudson Mohawk Institute of the College of St. Rose.

The idea of making the files more accessible to the public by publishing this index was the inspiration of County Clerk Thomas G. Clingan and Hall of Records Director Mary Vines, who were acting on an idea first proposed by County Archivist Tracy Grimm in 1988, when she began working on the collection as a College of St. Rose intern.

In the 350 years that Albany's County and City governments have been growing, so too has the quantity of records created in carrying out their functions. All of these records are crucial to the orderly activity and continuity of the local government and contain an abundance of research information. The records can tell the researcher anything from who owned a piece of property 200 years ago to the amount a local government agency paid for a new typewriter in 1930.

Usually, what these records cannot tell the researcher is why the person who owned that property bought it or how a secretary felt about using her new typewriter. Nor can they tell the researcher what prompted a given county or city agency to perform whatever act is documented in its records.

The records indexed herein do more than just document the stoic facts of Albany's history. They introduce the researcher to attitudes and experiences. From the people who ran Albany's governments to those who elected them, these records give an insightful view of the historical, social, religious, ethnic, and cultural make-up of Albany' s people.

It is important to remember that, although the majority of information contained in local government records is assumed to be fact, the same cannot be assumed of the records indexed herein. The researcher must remember that information in collections of research and oral histories by nature contain personal opinions and biases. Therefore, discrepancies may arise and facts should be confirmed by using primary sources.

Used with discretion, these files and oral histories can be an invaluable tool to gain insight into the rich history of Albany and the people who have lived it.

These records were compiled as general subject files of the Albany Department of Human Resources Bureau of Cultural Affairs, also known as the Bureau of Historical Services. The collection consists of over 1,500 files, each covering a different topic pertaining to Albany's history.

Topics for research were chosen in a variety of ways. Often, research was done to document the history surrounding a project in which the BOCA or another local government agency was involved. Sometimes, however, a simple newspaper article would spark interest in a project and research would ensue.

The following is an alphabetical list of all the file titles. Some files may relate to each other. When used together with primary sources, they can provide a clearer picture of many facets of Albany's history.

These 26 oral histories were compiled by the Bureau of Cultural Affairs between 1975 and 1981. The project centered around histories of Jewish settlement in the South End of Albany during the early part of the 20th century, and the Van Zandt House which stood at 137 - 139 South Pearl St.

The topic of history of the Jewish influence in the South End grew out of research relating to the history of that section of Albany. Such research was necessary to perform archaeological digs which preempted major renovations in the area.

One such dig was performed at the former site of the Van Zandt house which had been built in the mid 18th century. The information about the Van Zandt House contained in some of these interviews aided the archaeologists involved in that project.

In addition to supplementing our knowledge of structural history, these oral accounts paint a vivid picture of a flourishing South End community and its people in the first half of this century. Many interviewees discuss their experiences during historic events such as World War II and The Depression, and several speak of neighborhoods throughout the city.

It is important for the researcher to remember that these are personal recollections of individuals and should be approached with the understanding that accounts of events tend to vary according to each individual's perspective and memory. Used with discretion, these oral histories can bring history to life and fill the gaps in traditional records.

On the Home Front Oral Histories

This collection of interviews concentrates on civilian life in the United States during World War II. Most of the Interviewees discuss such things as rationing, transportation, and the workforce in the 1940's.

The following index, arranged alphabetically by the name of the interviewee, lists the name, date of interview, and major topics discussed during the interview. These oral histories, when used with other resources, may provide a deeper insight into the opinions and attitudes of home front Americans during World War II.

This set of oral histories was compiled by Joseph Anastasio, funded by a grant from the Greater Capitol Region Teacher Center. Mr. Anastasio donated his video taped oral histories and a copy of the completed transcript "New Scotland Avenue: The Section of the City That Kennedy Forgot" to the Albany County Archives in August 1989.

This collection is one of special significance to the Archives. This is not only because it explores the history of a part of Albany which has not often been studied, but also because these interviews are on video tape, a medium which may be the most personal link the researcher has to history.

The interviews in this collection generally contain information about the history of the New Scotland Ave. section of Albany. However, some interviewees cover such topics as their experiences in World War II and other historic world events.

The following interviews are indexed in the same fashion as the two previous sections. The researcher should approach these with an awareness of the often personal and emotional nature of the topics discussed.

Viewing on videotapes by appointment only.